What to Decide When You’re Expecting 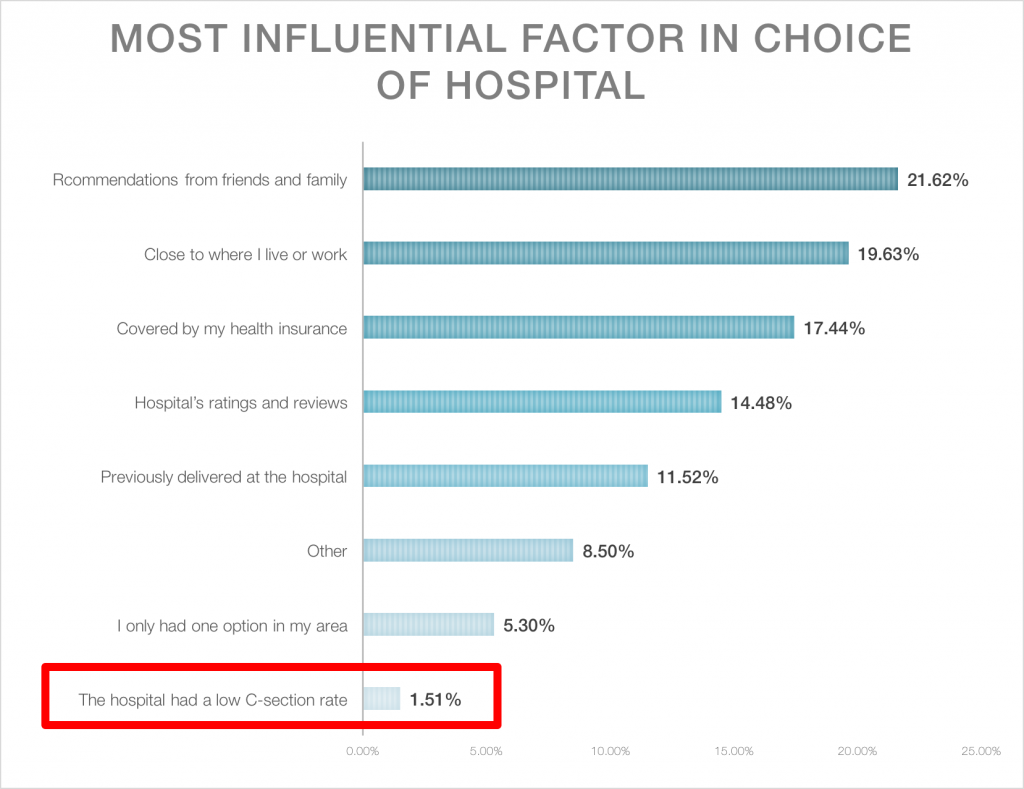 Selecting an obstetrician or midwife and birth center or hospital is arguably one of the most important decisions that a pregnant woman makes. This choice will determine many aspects of a woman’s pregnancy journey, including the likelihood that she delivers via C-section. To understand how women choose their obstetric provider and their delivery facility, Ovia Health has teamed up with Ariadne Labs to survey women and help shed light on this important decision-making process.

Few would debate that the United States is experiencing a C-section epidemic. One out of every three babies is born via C-section, despite the fact that 1) research shows that most pregnant women prefer and plan for vaginal delivery and 2) the World Health Organization (WHO) has argued that 10-15% is the optimal cesarean rate, placing the US at double or even triple the optimal rate. As the most common major surgery performed in the United States, C-sections are responsible for 20,000 surgical complications and infections annually, and account for over $5 billion in excess medical spend each year. Although C-sections can be life saving interventions, they still pose significant risks to both mother and child. C-section rates have risen at alarming rates across the United States, and many people, both inside and outside the medical community, are dedicated to uncovering and reversing the root cause of this trend.

Hospital as a risk factor

A major risk factor for delivering via C-section is hospital choice. Groups such as Consumer Reports have uncovered disturbingly high differences between C-section rates at hospitals just miles away from each other. There is evidence that there is a 10-fold variation in the cesarean delivery rate across hospitals in the United States — ranging from 7% to almost 70%. This variance cannot be accounted for by known risk factors such as age, ethnicity, and weight, leaving researchers to ponder what is it about certain hospitals that lead to such large discrepancies in the number of C-sections performed.

We know that hospital culture and management practices influence delivery decisions. Labor and delivery floor management practices, availability of midwives within a hospital setting, obstetric provider preference, and scheduling conflicts have all been shown to play a role in a patient’s likelihood of delivering via C-section. Most obstetric providers no longer encourage elective C-sections. However, a variety of procedures commonly used in routine obstetric practice, such as continuous electronic fetal monitoring, have been shown to increase provider reliance on C-sections.

We know that women do not consider C-section rates when making a choice about their delivery care. Yet little else is known about how women decide on a hospital or obstetric provider for their pregnancy. This gap in knowledge prevents researchers from tailoring interventions to influence hospital choice effectively, which is why a collaborative team from Ovia Health and Ariadne Labs surveyed over 9,000 users of the Ovia Pregnancy app to understand the factors that most influence the hospital and obstetric provider decision-making process.

Which comes first, hospital or provider?

How is the decision made?

Yet when women were asked to choose only the most important factor that influenced their hospital or provider decision, women gave the most weight to recommendations from family and friends in both deciding where to deliver and who will deliver their babies. As it turns out, women are engaging in pretty rigorous qualitative analysis to come to a final decision about their prenatal and delivery care.

Could it be that women cannot access or interpret these C-section rates? There is no unified database of accurate C-section rates due to the differing data-sharing practices that exist at the state-level. Some states such as California share C-section data about hospitals on their websites, whereas other states’ privacy laws prevent these data from being shared with the public under any circumstances. This creates a confusing landscape for women to traverse when considering hospital quality metrics. Furthermore, recent research tells us that most women do actually care about hospital quality metrics, they just don’t know how to access or interpret that data effectively.

The good news is that most pregnant women already engage in their own fairly rigorous research process before making a hospital or provider decision. Our survey participants reported using insurance websites to search for, and more importantly, compare in-network providers and hospitals. Peer level data is also relevant to these women — many respondents reported researching community reviews, using HealthGrades to access provider ratings, and some even turned to Yelp.

We find these results encouraging. Women already care about recommendations, ratings, and reviews, so incorporating C-section rates into the decision-making process should be possible. Our results indicate that the medical community needs to do a better job of translating hospital quality data so that it is easier to understand and access. We hope that when hospital quality metrics become widely accessible and easy to use, women will start leveraging these data to guide their choices about how and where to deliver. Ariadne Labs and Ovia Health aim to be a forces of change in this landscape, providing transparent information about doctors, midwives, and hospitals to Ovia Health’s millions of users in a way that is useful and can help women make an informed decisions.

There is no one factor that is the critical game-changer when women make decisions about where and who should deliver their babies. Instead, a combination of factors leads to the ultimate decision. It is our hope that as hospital quality metrics, especially C-section rates, become more accessible and easier to interpret, women will start using these data to make their most important pregnancy decision.

The provider and hospital decisions survey aimed to gather greater insight into how pregnant women make decisions about the care they receive from the healthcare system throughout their pregnancies. We surveyed over 9,000 pregnant users of the Ovia Pregnancy app, a mobile app that enables women to track their pregnancies and learn more about their fetus’s development. The majority of respondents were between the ages of 20-29 (50%) and 30-49 (46%). Most participants identified as White (75%), Hispanic (9%), or Black or African American (7%). Education and income levels were evenly distributed.

Erin Landau is with Ovia Health and Dr. Reena Aggarwal is a researcher with Ariadne Labs