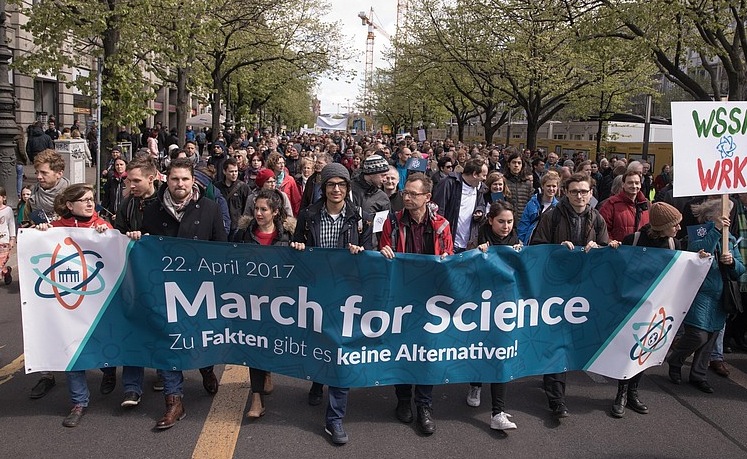 In college, I once marched for the plight of Tibetans. Forty of us marched in Hyde Park, London – after an hour, half retreated to the nearest pub to discuss global injustices. Recently, over a million, including five penguins, marched for science. There were no penguins at our march for Tibetans but our goal, though naïve and unrealistic, was clear – we wanted Tibetan independence from Chinese rule. The goals of March for Science, a worldwide endeavor with marches as far south as Antarctica, were numerous and ambiguous.

If you attended the science march expecting to hear about the theory of ether, the nuances of the Special Theory of Relativity, or Galileo’s brush with the papacy, you’d be disappointed. While it was not clear what the march was about, it was patently evident what the march was not about. The march was not about scientific inquiry or an embracement of the scientific process. The marchers were not protesting their right to think freely without persecution.

Many marchers were protesting their right to the public purse particularly, as President Trump has threatened to slash the budgets of government agencies more mercilessly than parents slash the pocket money of an itinerant teenager. It was like Galileo protesting outside the Vatican, not so that he can experiment in peace, but that the Pope fund his activities.

How did scientists transform from demanding more freedom to demanding more funding? Science, particularly biomedical sciences, has changed, and is now an expensive enterprise with considerable oversight. It is no longer possible for curious clergymen with time on their hand to dabble in science. Science, like art, has become a profession. To be funded is to be free – with some restrictions. The scientist, once stubbornly curious, now curiously adheres to stubborn protocols.

When I think of scientists, I picture Archimedes running naked in the street shouting “Eureka.” Scientists no longer run naked in the streets. But the change in science begs a more primal question – what does science even mean these days?

The science march seemed less about science and more about social injustice, and a lingering disbelief in a constituency that Mr. Trump, not Mrs. Clinton, is the president.

The fervor for the march suggests unprecedented scientific thinking in our society. However, the truth may be different. In enlightened circles, God is dead but faith is alive and kicking. New faiths are on the rise – faith in our ability to perfect man, faith in methods to engineer society and, above all, faith in technocracy.

The new science is a science for the people and of the people, but not by the people – few understand the language of technocrats. Still, science has been democratized. Science no longer is commissioned just to discover the mysteries of the multiverse, but to build a safer and fairer society. If philosophy begins where science ends, science now begins where religion ends. Science has taken over King Solomon and Raja Vikramaditya. The motto is not “govern justly,” but “govern scientifically.” We would now need data, not moral intuitions, to tell us that the Tibetans have faced injustice.

The new sciences need public funding. But Mr. Trump, to cut taxes and regulations to spur economic growth, has proposed substantial funding cuts for government scientific agencies. Even the Centers for Disease Control and Prevention (CDC) will get a haircut – a $1.2 billion cut, which its former director, Thomas Frieden, warned could lead to widespread deaths.

During the Ebola epidemic, the CDC played a more important role than the World Health Organization in containing the epidemic. But the CDC can lose its way by doing too much. The agency, under the capacious umbrella of “prevention,” has taken more than just infectious diseases on its plate, including issues such as workplace health, food safety, smoking and obesity, and has published “Preventing Chronic Disease.” If there’s an outbreak of a rogue virus, and statistically speaking this is a certainty, the fate of our species may depend on the CDC. Yes, I’ve watched Outbreak.

Why doesn’t the CDC stick to its most important mission – dealing with infectious diseases? Why the mission creep? A barber seldom says, “you don’t need a haircut.” A government agency never says, “we have enough funding, thank you.” For an agency, more work and more mission means more funding.

Similarly, Mr. Trump’s proposed cuts to the National Institutes of Health of $5 billion could be counterproductive. Publicly funded science drives private innovation and innovation drives growth. But, in so far as science is publicly funded, taxes are the mother of science, and people generate taxes, and many taxpayers are increasingly dubious of a science that’s increasingly politicized. Apocalyptic warnings of the dangers of defunding science will further tune out the proletariat from a class many believe are self-righteous and self-serving.

Science is at its weakest when scientists are most certain and the “science is settled.” Science’s biggest draw is that it embraces errors, eccentrics, and misfits. There is a discipline often applied in healthcare known as “Implementation Science” or the science of getting doctors to obey rules, which sounds like training some doctors to become a modern-day Moses to preach 10,000 Commandments (MACRA) to other doctors.

If science replaces religion, it’ll suffer the same fate as religion – people eventually lose faith in dogmatism. The challenge for scientists, a challenge singularly ignored in the March for Science, is in restoring in science its twin beauty of curiosity and skepticism. Instead of proclaiming “science is settled, you idiots,” scientists might celebrate the unsettling of settled science. We can have a unique Independence Day to celebrate emancipation from old facts and laud the scientific method which freed us, rather than vilify the original error.

Saurabh Jha is a contributing editor to THCB. This piece was originally published in Telegraph