Lessons From the 100 Nation Ransomware Attack

By ROSS KOPPEL and HAROLD THIMBLEBY 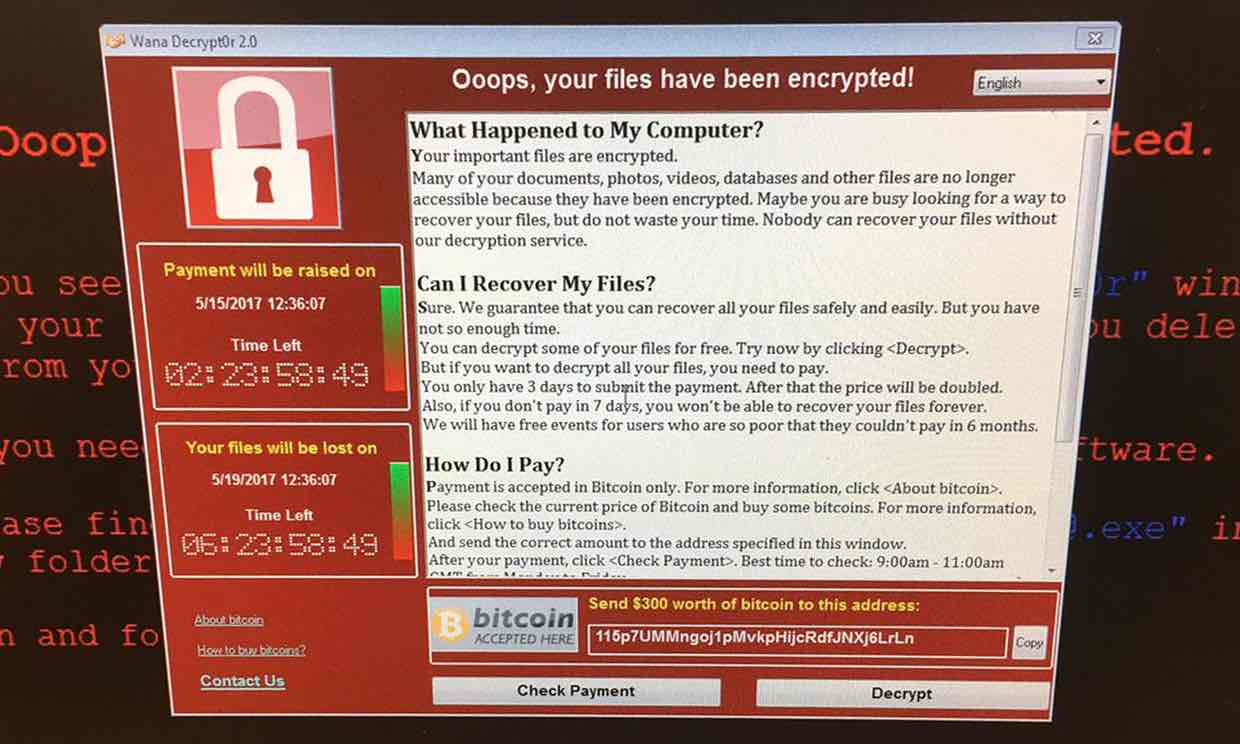 The world is reeling from the massive ransomware attack on at least a hundred nations’ computer systems. The unprecedented malware spasm infected hundreds of thousands of computers, and would have infected millions more but for a 22-year old computer science student who found a vulnerability in the malware that he used to curtail the infection. He found it looked for a non-existent URL, so he a set up that URL and found he could stop it spreading. Of course, now the hackers know that, it is an easy matter to update the malware to use other URLs and other techniques. Clearly, this iconic malware attack is not going to be the last.

What do we know about the malware? The NSA (the US National Security Agency) found that there was a vulnerability in some of Microsoft’s operating systems. The NSA was itself hacked, and ransomware was developed that exploited the vulnerability. This ransomware was then distributed on the black market. The original flaw is called “EternalBlue” and it was converted into the now notorious ransomware program called “WannaCry.” It is important to note that no special skills are required to actually use ransomware: WannaCry is just a tool a criminal buys in the hope of causing chaos or making money or gaining fame.

The NSA has an interesting problem. It discovers a backdoor that may help it fight terrorism, so it makes sense to keep it secret. In hindsight, once the flaw is known to hackers it is quickly exploited, and the rest of the world is unprepared for the consequences. In any case, Microsoft, on March 17, 2017, issued patches for the vulnerabilities for its currently supported software, which most people use on a day to day basis.

This left the most vulnerable software, Windows XP, which is so old that Microsoft no longer issues security patches for it. However, perhaps because of the scale of the problem, MS belatedly sent a patch for the old XP software – a rare event for them. It is interesting to ask why they did not release the patch in early March (or before), since it is well known that many hospital systems rely on XP.

The computers that were most easily infected were those that had not updated the patches, including, most notably in US press accounts, about a quarter of the computer systems running hospitals and medical practices in England and Scotland. We have hundreds of reports of hospitals cancelling operations, of scheduling horrors, of doctors treating patients blind to their medications and medical data, of failed phone systems, of chaos and fear.

The answers are our lessons:

In sum, we must learn from this attack that healthcare IT departments require a level of cybersecurity awareness and skill that is not ubiquitous. The system is only as strong as its weakest link. Relying on vendors—who focus on sales of individual products or services—will not provide enterprise-level security.

As of this writing, we don’t know how successful the efforts have been to re-establish systems. We know some were backed up, at least partially. But why not all of them?. We know some systems are now working again. But we don’t know what is being done with the data, and we certainly don’t know the consequences of delayed healthcare, frozen emergency departments, lost information, untreated illnesses and trauma, etc.

Theresa May (the current UK Prime Minister) has assured the UK that patient data were not affected or leaked, just that the computers weren’t working. One might ask: how does she know? She doesn’t; she couldn’t possibly know.

We should take cybersecurity seriously, and healthcare IT leaders need a synoptic vision and understanding if they are to protect the systems they operate — and the patients that depend on those systems working. Hospitals also need sufficient funding to make that protection possible. However, funding is not enough. Hospitals need wisdom to use that funding sensibly.

If that’s the main lesson, there are many difficult questions remaining for the future. A selection would include:

If we can’t answer the questions, we either fail (and we harm patients) or we have to go back to school and learn some more.

Professor Koppel is a leading scholar of healthcare IT, and of the interactions of people, computers and workplaces. His articles in the major medical journals are considered seminal works. He is on the faculty of the Sociology Department and of the Medical School at the University of Pennsylvania, where he is also a Senior Fellow of the Leonard Davis Institute at Penn’s Wharton School. For the past 6 years he has also worked on cybersecurity.

Prof Harold Thimbleby is an internationally recognized computer scientist who works in healthcare IT. He has a particular interest in patient safety and user interfaces (e.g., the design of infusion pumps). His work has been recognized with honorary fellowships of medical colleges, like the Royal College of Physicians, where he is Expert Advisor on IT.