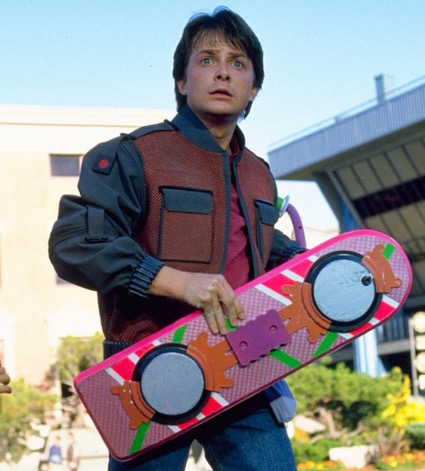 When I was 10, Marty McFly rode a hoverboard through a 2015 Hill Valley’s Courthouse Square, and I knew what I wanted from Santa that year. Needless to say, I was disappointed that Christmas morning in ’89.

Fast forward to  the real 2015, and a tattooed woman in her early 20’s has maneuvered her way off the DC Red Line and onto the escalator in front of me riding some kind of self-powered two-wheeled object that looks like a disembodied Segway. It has a blue neon underglow that gives it the appearance of floating. My calves ache in sympathy as she shuffles to maintain her balance on our long ascent to the street, and I hold my breath as she navigates to solid ground, surprisingly without incident. As she pivots, I ask her the name of this strange new transportation device.

“It’s a hoverboard,” she tells me.

And I know exactly what I want for Christmas this year.

When the Razor scooter gained popularity in 2000, we saw a transient marked increase in injuries, mostly involving the head and neck region or the extremities, particularly forearm fractures. Back in the early 2000’s when we started noticing this trend clinically, such retrospective studies were major undertakings. (As a college sophomore during that time, I spent months buried in the depths of the dusty Mount Auburn Hospital medical records file room, pulling charts by hand, reading angiography reports, and copying information into an Access 1997 database all to answer a relatively simple question.) In fact, although a very small case series was published within a year, most of the studies on pediatric scooter-related injuries were not published for 3-5 years after doctors began to register concern.

These days, more universal electronic health record implementation certainly facilitates data abstraction; yet in most cases, all the information is siloed. As we see with the scooter studies, the data is limited to a particular institution unless a national dataset is available, an effort that usually requires significant resources. Early in the rise of an illness or trend, the incidence at any one institution may be extremely low, such that only small case series may be gathered over many months.

After my encounter in DC, I came back to Boston and wanted to look into the safety of these new hoverboards. Since athenahealth is a cloud-based services company we were able to tap into our network data of over 72,000 healthcare providers and their 55 million patients in the US.

We found that, over the past six months, 144 distinct patients (7.3 per million patients on our EHR) had the word “hoverboard” (or some synonym thereof) typed or dictated into their History of Present Illness in 156 encounters. We excluded 31 patients without a diagnosis related to an injury or pain, assuming the provider and patient had discussed hoverboards for some other reason (many of these had diagnoses of autism spectrum disorder, ADHD, sensory processing disorder, or vision problems and may have been referring to a “balance board”).

Though still rare, the incidence of these hoverboard-related visits has been trending upward through November, and it appears that this progression may continue. 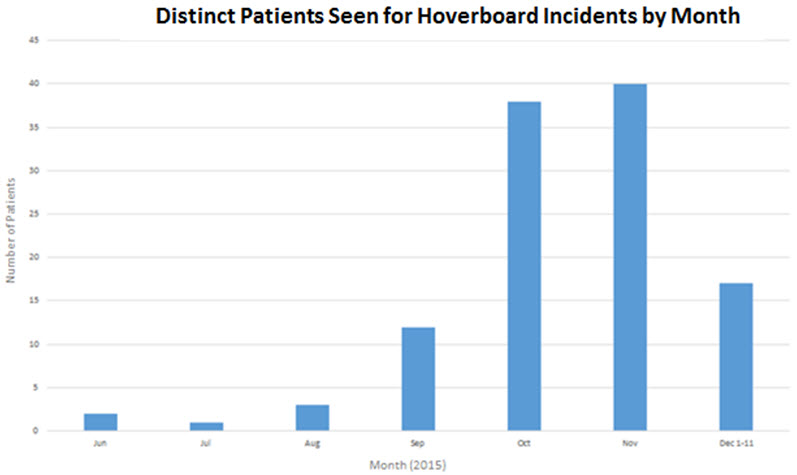 De-identified patients were mostly adolescents, with a spike among 9-year-olds and several 49-50 year-olds as well, 59.3% were male. 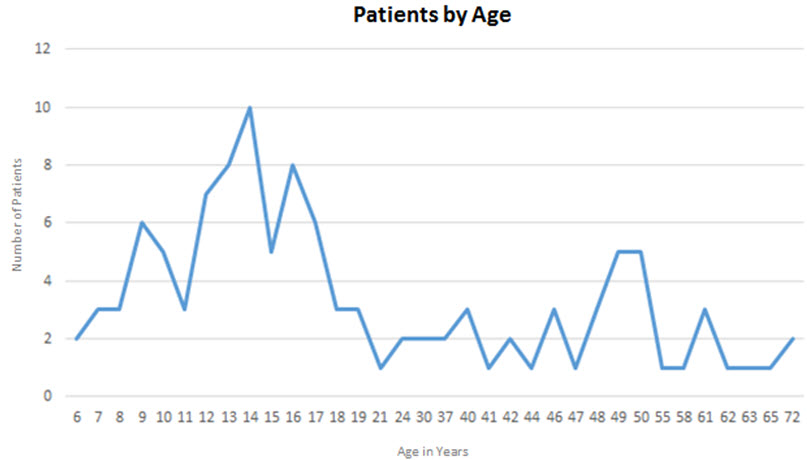 The most common injury and pain-related diagnoses associated with hoverboard visits were headache, fracture of the distal radius, and concussion. 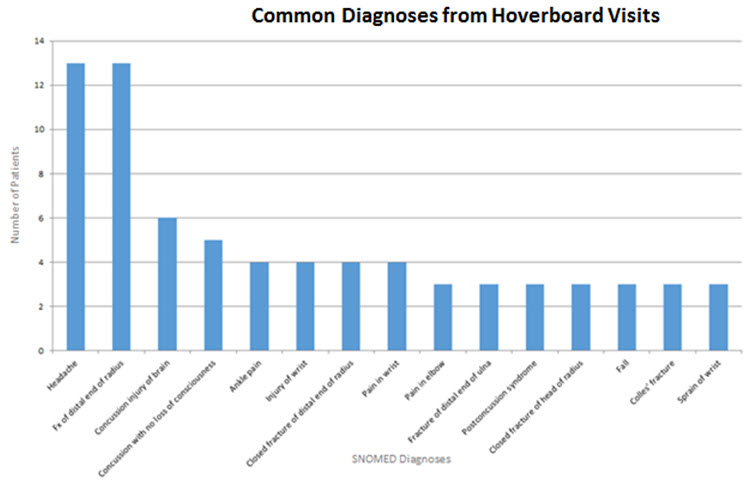 The data we’re seeing on our network is consistent with what we know of non-mechanical scooter injuries, though more concussions seem to be diagnosed from hoverboards. This may be due to the overall rise in concussion diagnoses noted between 1997-2007; thought to be at least in part due to increased awareness of the condition.

We then went one step further and analyzed state by state, noticing that more of these injuries have been occurring in NJ, CA, FL, and GA, without any specific evidence of regional clustering. The high number of cases in New Jersey is interesting, and one could speculate that the New York City ban on hoverboards may lead some enthusiasts to ride their unregistered “motor vehicles” across the river.

Since we know that the patient population on our network is representative of the national population in age, gender, and insurance coverage, these findings are most likely indicative of a larger trend. For this reason, we issued a holiday warning to parents, health care professionals and the North Pole encouraging safe gift-giving.

Considering this data (which took us the better part of an afternoon – not several months or 4-5 years – to aggregate), I’m starting to think twice about adding a hoverboard to my Christmas list…or at least asking for a helmet and wrist guards to go with it.

Either way, it’s clear that in 2015, we’re already living in the future. At athenahealth, our vision is to be the nation’s health information backbone, not only to allow clinical information to be exchanged seamlessly at the point-of-care, but also to enable detection of these types of public health and safety trends earlier than ever before possible. Just call us the flux capacitor of healthcare.