McAllen: A Tale of Three Counties

The challenge of constraining costs while maintaining or enhancing the quality of medical care is vividly brought to life by Atul Gawande in his recent widely-read New Yorker essay.  The anecdotal evidence presented in the article is compelling as a description of how physician practices can relate to excessive costs.  The assertion that the observations in McAllen also explain McAllen’s costliness is an inductive exercise that may go too far.  Physician ownership of imaging facilities, ownership interest in hospitals and more subtle forms of self-referral are all substantially present in large healthcare market areas across the country.  Is McAllen an extreme example of a bad physician culture or is there another explanation?  Our analysis of Medicare data from McAllen Texas demonstrates that exceptionally high rates of chronic disease and poverty explain much of the variation in cost.

According to Gawande, McAllen Texas has a physician culture that promotes high cost, low quality care. By comparison El Paso is portrayed as having a similar patient population to McAllen with lower costs of care.   Grand Junction, Colorado, however, the antithesis of McAllen according to the article, is credited with having a physician culture that promotes low costs and high quality.  Ultimately Gawande warns that by failing to change the physician culture nationally, “McAllen won’t be an outlier.  It will be our future.”  But is McAllen really an outlier, a harbinger of physician income-enhancing practices run amok?

A fair comparison between McAllen and Grand Junction would include a more precise analytic methodology than could be offered in Dr. Gawande’s article.  Such an analysis is important: the correct diagnosis of the health care cost crisis is an essential step in selecting an effective prescription.  If McAllen is not an outlier and Grand Junction is not a paragon, then the solution is not to simply tamp down variation by exporting Grand Junction values to McAllen.  If the physician practices reported by Dr. Gawande in McAllen lead to explainable patterns of costs according to current norms, then those practices are part of a national phenomenon right now, not in a nightmare future.

An analysis of the Medicare population in the three counties can place Dr. Gawande’s observations in a more complete context.  Medicare beneficiaries enjoy a standardized benefit package, and detailed data are available on the services they receive.  We can use cost data for Medicare enrollees in the three counties to test Dr. Gawande’s assertions regarding McAllen’s and Grand Junction’s comparative health care costs.  Medicare fee-for-service claims provide us with service level payment and patient health status information; Medicare monthly enrollment data details HMO affiliation, Part B premium assistance and beneficiary demographics.  The Centers for Medicare and Medicaid Service supplies researchers (including the Dartmouth Health Atlas team) with data of this type for Medicare policy analysis.

The city of McAllen lies at the center of Hidalgo County, one of the costliest areas for Medicare.  The population is racially diverse, low income and exhibits high levels of chronic disease.  El Paso is similar to McAllen but with less poverty.  Grand Junction is the county seat of Mesa County, a largely white and relatively wealthy region.  In Exhibit 1 annualized Medicare fee-for-service payments for the counties of McAllen, El Paso and Grand Junction show wide divergence in the total Medicare spends per beneficiary.2

Exhibit 1: Annualized Payments per Medicare Beneficiary by County of Residence, 2006

The payments in McAllen’s county are twice as high as in El Paso’s and nearly three times as high as in Grand Junction’s but adjustments are required to the statistics to make the comparison fair.  These adjustments should include normalization for Medicare coverage type and population health.  Relatively few McAllen area Medicare beneficiaries are enrolled in HMOs (2%) in comparison to Grand Junction (42%) and El Paso (16%).   Medicare publishes costs only for services paid on a fee-for-service basis; some services supplied by cost-based HMOs (more common in Grand Junction than in either McAllen or El Paso) are included and some are not.  As a result the cost of care for counties with high numbers of Medicare HMO enrollees is under reported.  In addition, while all eligible individuals receive hospital insurance under Part A of Medicare, beneficiaries must pay a monthly premium to receive outpatient coverage under Medicare Part B, or are enrolled by Medicaid if they are poor enough to meet the state’s income requirement.  The percent of the population in the different counties without full Part A and Part B benefits varies.  In Grand Junction almost twice as many beneficiaries do not have Parts A & B coverage compared to McAllen (4% versus 8%).  The outpatient expenses of this population are not included in Medicare expenditure reports.  In Exhibit 2 HMO enrollees and Medicare beneficiaries without full Medicare benefits are removed from the comparison.

When the analysis is restricted to cost and enrollment data only for Medicare fee-for-service beneficiaries covered by both Part A and Part B, Grand Junction’s beneficiary annual costs rise by almost 25%.  The difference between McAllen and Grand Junction beneficiary costs falls, but McAllen Medicare costs, now for populations with the same coverage, are still well over twice those for Grand Junction.

The dissimilarities between the McAllen and Grand Junction county populations are extensive.  The socio-demographic characteristics of a population affect its access to care, ability to pay out of pocket for uncovered care and rates of disease associated with diet and life history.  The costs of Medicare co-pays and deductibles can be substantial barriers to access, and history of health care coverage and access to preventive care vary substantially based on socio-demographic variables.  Low-income individuals often reach Medicare enrollment age with a lifetime history of access and cost barriers, a potent mixture.  Barriers to access to care can lead to expensive hospital care for conditions normally treated on an outpatient basis.

Grand Junction Medicare enrollees are 98% white and only 11% require assistance in paying for their Medicare Part B premium (a proxy for low income status).  In contrast McAllen and El Paso are both 26% Hispanic, and a higher proportion of Medicare beneficiaries rely on Medicaid to pay for Part B — 36% in El Paso and 48% in McAllen. To assess how socio-demographic factors affect Medicare costs, Exhibit 3 compares costs for beneficiaries with and without Part B premium assistance.

But socio-economic differences in themselves cannot explain cost differences. What makes the low income population so much more expensive to care for? And why is El Paso, which also has a large low-income Medicare population, so much less costly to Medicare than McAllen?

Many of the disease rates for the McAllen population are more than double those for Grand Junction.  If the Medicare population in McAllen is truly that much sicker wouldn’t we expect the payments to be greater?  A comparison of expenditures for Medicare enrollees without a diagnosis of diabetes or heart disease in the last year shows that costs for these standard populations are statistically very close (Exhibit 5).

Exhibit 5: Medicare Monthly Payments per Patient without a Diagnosis in the Year for Diabetes or Heart Disease, 2006

By eliminating diabetes, ischemic heart disease or heart failure from the population payment measures the Grand Junction advantage is completely removed.  Grand Junction is just as costly as McAllen for populations without one of these conditions.

Even though diabetes and heart disease are both costly and highly prevalent in McAllen, beneficiaries experience a wide range of costly illnesses, and patients with multiple conditions are difficult to treat.  We used a more sophisticated risk adjustment method to take into account an array of concurrent conditions.3 Beneficiaries in the top risk scores, the sickest patients, make up 27% of the McAllen, 16% of the El Paso and only 12% of the Grand Junction populations. Average Medicare payments were then computed for each risk group in each county (Exhibit 6). The effect on costs of accounting for this measure of illness burden is dramatic. 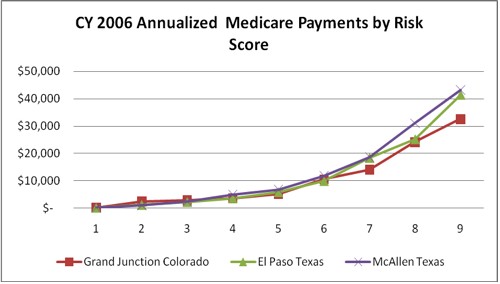 Taking into account the disease combinations eliminates the apparent low cost difference across the full range of disease risk scores. If the disease levels in the McAllen population were magically made to match the Grand Junction disease distribution, but experienced McAllen-level costs, annualized Medicare payments would fall from $13,150 to $6,145.  The morbidity-adjusted per beneficiary payment rate for McAllen is 10% higher than the $5,579 Medicare per beneficiary annualized payments observed in Grand Junction, substantially less than the observed 300% payment differential seen in the unadjusted data.

McAllen is different from many areas of the United States: it is sicker and poorer.  The observed differences in the rates of chronic disease are highest for those conditions rampant in low income American populations: diabetes and heart disease. Further, Medicare beneficiaries in McAllen have significantly higher rates of co-occurring chronic conditions. As a result the costs of caring for McAllen Medicare population appears high in comparison to other areas but not abnormally so.  McAllen suffers from a tremendous burden, but it not caused by its physicians: the care they provide leads to costs that are substantially comparable to the other counties in the article once adjustments are made for the magnitude of the health problems they face.  The disturbing pattern of physician practices uncovered by Dr. Gawande sounds a warning not because it foretells a McAllen-like future but because it portrays the on-going crisis that affects both McAllen and Grand Junction and it is national in scope.  Physician culture is only part of the McAllen story.

Patients with chronic disease, especially those with multiple conditions, are extremely costly to treat.  Cost savings will not be realized by denouncing and penalizing medical systems because they treat patient populations with high rates of disease.  Instead health care reform must develop policies that support streamlining and coordinating care for beneficiaries with multiple chronic conditions, wherever they reside. Policies that support lifetime continuity of coverage, disease prevention and early treatment, could reduce healthcare costs for populations who now reach Medicare eligibility with a history of under-service.  Physician culture has a role to play: Accountable Care Entities are intended to reduce barriers to access by facilitating care coordination. The high costs of care in places like McAllen will not be dramatically reduced by transforming physician ethics and organization if the roots of the crisis are in the interaction between class, demographics and chronic disease.

1)  The payment amounts and beneficiary counts are from CMS claims and enrollment data that includes a 5% sample of the Medicare population.  The data is hosted by JEN Associates Incorporated of Cambridge Massachusetts, a CMS MRAD contractor.

2)  A risk score ranging from 1 to 13 was computed for each beneficiary using diagnoses found on Medicare physician and hospital claims.  Beneficiaries with scores greater than 9 are not observed in the Grand Junction 5% data in numbers sufficient for analysis.  The grouping and scoring system was developed by JEN Associates Inc. of Cambridge Massachusetts for Medicare and Medicaid program planning and evaluation applications.  Diagnoses are selected based on correlation with future hospitalization, nursing home entry and death and grouped according to a disease’s functional impact.

Daniel Gilden is a health services researcher with 20 years of hard core quant experience.He’s the President of JEN Associates which provides highly specialized analysis of Medicare and Medicaid data. He contacted THCB regarding the fuss about the  McAllen, TX “overuse” story. In his calculations the data suggests something very different from the “practice variation” theory–the patients really are sicker. As this goes counter to decades worth of work by Wennberg et al, we invited Daniel to share his data and methodology with THCB. And we invite those of you who like this kind of research but may disagree with Daniel’s analysis to respond. Finally it’s worth noting that if his conclusions are true this has huge implications for overall health care policy…Matthew Holt