Late last year PR/Communications giant Edelman released a survey called the Health Engagement Pulse. (Here’s the press release and here are the charts) This is separate from both Edelman’s Trust Barometer which has looked at consumer engagement and trust in business and institutions for years, and their Health Engagement Barometer (HEB) which looked at engagement in health in five countries in 2008 and is going to be run again this spring. At Health 2.0 we;ve worked with Edelman and featured the HEB data in our meetings and will continue to do so. Recently I “chatted” with Edelman’s President for Health, Nancy Turett, to find out what she thinks the data is telling us about people’s attitudes towards “health”.

Nancy Turett: Over the past several years, our engagement in all things health has growth dramatically, giving us a particularly useful whole-egg look at health industry, issues, and especially the growing convergence of public and personal health imperative. With clients from all industries and sectors grappling with health — costs, social expectations, pressures to innovate, and policy changes underway — we’ve found it useful to all to provide insights about what the public-at-large — wearing their many health hats — knows, wants, cares about and does as relates to health.  And as a communications and engagement firm, we’ve delved particularly deeply into how people are influenced and how they influence others.

The Health Engagement Barometer, which we created and conducted for the first time a year ago, shone a bright light on some key issues, and identifying a fascinating cohort of people who by dint of their engagement, involvement, and information about health, have high influence over the attitudes and actions of others. We called them the “Health Info-entials.” We also learned a lot about people’s interest in engaging with health brands and companies — and we found people crave more connection than they’re getting — and that transparency and completeness trumps perfection when it comes to building trust between a health-involved brand and a consumer.

The State of the Union – And the Economy: Why We Need Health Care Reform Now

According to the headlines, 10 percent of Americans are unemployed. The truth is that closer to 17 percent of the population cannot find full-time work; this number includes workers who have become discouraged and have given up looking for work as well as those who have settled for part-time jobs because they cannot find the full-time employment that they need.

The situation is not going to change anytime soon. As Princeton economist Paul Krugman recently warned: “We are facing mass unemployment — unemployment that will blight the lives of millions of Americans for years to come.”

“Even if industrial production picks up, unemployment will continue to lag,” observed Goldman Sachs’ Abby Cohen, speaking at Barron’s Roundtable about a week ago. “The problem is far more than cyclical.” (You may remember Cohen as a bull during much of the ‘Nineties boom. By temperament, she is hardly a doomster, but when she looks at today’s economy, she is very concerned.)

Cohen is saying jobs are not going to suddenly appear with the next business cycle. Current levels of unemployment reflect deep structural problems that go back at least two decades.

ACOR, Health 2.0 in the US & Europe: Gilles Frydman tells all

Gilles Frydman is one of the leading ePatients. He started and runs ACOR (Association of Cancer Online Resources) and has discussed the role of engaged patients with rare diseases at the last few Health 2.0 Conferences. We’ll be hearing more from Gilles in the US this year, but first we’re inviting him to present at Health 2.0 Europe. His twitter name (@kosherfrog) reveals Gilles’ ethnic and national background, so we thought he was a very appropriate person to discuss both the future of online patient activism, and the Health 2.0 scene in the US and Europe.

Matthew says: Gilles, you’re best known for the ACOR list-servs which now see over 1.5 million emails a week go out in around 150 different cancer groups. Can you tell us how it started?

Gilles says: In 95 my wife was diagnosed with breast cancer. She came home and told me of the diagnosis and I immediately went on the Net to find information about the disease and treatments

Matthew says: And what did you find?

Gilles says: Within 30 mins I had the BREAST-CANCER list and joined it. I didn’t follow protocol and jumped right in and asked about the diagnosis and what we were told was the treatment for it. Within 2 hours I had enough info to call back the surgeon and tell her we were going for a second opinion and that we would wait for the surgery she had told us was absolutely necessary. She “fired us” on the spot. Because we went for a second opinion!

Matthew says: I’m not surprised. Probably might happen today too

Gilles says: But as a result of  what I was told my wife didn’t have chemo. She didn’t have a radical mastectomy. She didn’t have brain, liver and bone scans. All of which would have been TOTALLY USELESS for the type of BC she was diagnosed with. Thanks to informed patients, she just had a lumpectomy and radiation. No piece of cake but MUCH LESS than chemo. So, that started me

Matthew says: So is that a typical interaction on ACOR?

Matthew says: Can you give some examples

Gilles says: Just yesterday on one of the pediatric lists, a mother was writing about her son’s latest situation where all the doctors have now told them there is nothing more to be done. In short the woman writes about what can only be the worse possible situation for a mother, but she does so in an incredibly rational fashion.

Gilles says: ACOR is a little under 60K active subscribers, over 165 groups, from 60 members to 3,000. Some of the groups generate close to 200 messages a day

Matthew says: What does it cost to run ACOR in both money and time, and how is it financed?

A wonderful sad and happy story about someone who never thought disease could happen to them. (It’s relatively long and plays in sections or you can go to the original site)

From a system/policy perspective, the role of complementary and allopathic medicine is pretty interesting. But this is a story about a fighter.

A Message to America’s Physicians: Purchasing EHR Technology A Shaky State of Affairs

By Brian Klepper and David Kibbe

Much of the conversation and debate about physician EHR adoption has centered on the single issue of the (high) cost of purchase.  However, we’d like to suggest that the situation is much more complex and involves several more subtle variables.

Consider, for example, uncertainty about the future.  In a recent speech, Lawrence Summers, Director of the White House’s National Economic Council for President Barack Obama, related the following analysis about decision-making under conditions of uncertainty in the marketplace, which he had first heard from Ben Bernanke, current Chairman of the Federal Reserve, in a speech Mr. Bernanke gave over 30 years ago: 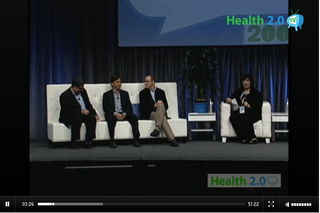 Overview: With consumers turning to online sources in record numbers, competition is heating up between the giants in the field. In this segment recorded at Health 2.0 San Francisco, key players at Google, Microsoft and WebMD talk about important shifts in the industry landscape over the last year, their companies’ near term plans and the powerful trends likely to shape the way Americans – not to mention the rest of the planet – use the internet to look after their health and search for reliable health information.

Gov 2.0: Obama administration CTO Aneesh Chopra talks about the administration’s call for innovation  in Silicon valley and broader adoption of information technology throughout the healthcare system. A must see in light of the national healthcare reform debate and growing investor interest in health IT.

Change The Rules and Get Your Labs

In 1999 Caresoft developed a consumer web portal called the Daily Apple.  The Daily Apple wasn’t all that unique or different than other health portals, until in May of 2000 they began helping consumers download their lab test results from Quest Diagnostics. Now THAT was different! A portal aggregating real clinical data on behalf of consumers, with the potential to drive personalized health information, recommendations, and alerts to the individual. “Looks like your exercise and your diet are keeping your blood sugar under good control. Great Job!” and “Your liver enzymes are elevated, which might be due to your Lipitor. You should talk with your doctor.” Now that’s information a person can use! But sometimes even the best ideas suffer from poor market timing. It was only 19 months later, in December, 2001, that the service was discontinued. Many of us on the outside wondered why such a seemingly unique and valuable service would be disabled. But whether it was the lawyers, the doctors, or the business model, timing wasn’t right.

Only a couple years later, in 2003, the Office of Civil Rights at HHS wrote the HIPAA Privacy Rule regulations, allowing consumers to access a copy of their own protected health information. But they carved out lab data as a special case. Lab data (or data governed under the Clinical Laboratory Improvement Amendments, or CLIA), was to be governed under CMS regulations that stated that lab test results could only be delivered to “Authorized Persons”, defined as “an individual authorized under state law to order tests or receive test results, or both.”Continue reading…

Physician Accountability for Violation of Safety Rules: The Time For Excuses Has Passed

In a recent New England Journal, Peter Pronovost and I make the case for striking a new balance between “no blame” and accountability. Come on folks, it’s time.

At most hospitals, hand hygiene rates hover between 30-70%, and it’s a near-miracle when they top 80%. When I ask people how they’re working to improve their rates, the invariable answer is “we’re trying to fix the system.”

Now, don’t get me wrong. I believe that our focus on dysfunctional systems is responsible for much of our progress in safety and quality over the past decade. We now understand that most errors are committed by good, well-intentioned caregivers, and that shaming, suing, or shooting them can’t fix the fallibility of the human condition.Continue reading…