While we in the United States debate whether health care is a right or a privilege, Puras cites U.S. international treaty obligations as authorities for why health care is a right. In particular, he argues that Article 25 of the Universal Declaration of Human Rights (UDHR), a Declaration which the US voted for and had a key role in developing, clearly “establishes everyone’s right to a standard of living adequate for the health and well-being, including food, medical care and necessary social services”

He further cites other similar provisions in international treaties, conventions and UN Committee comments including Article 12 of the International Covenant on Economic, Social and Cultural Rights (ICESCR) (signed but not ratified by the U.S.), article 5(e) the International Convention on the Elimination of All Forms of Racial Discrimination and General Comment No. 14 of the Committee on Economic, Social and Cultural Rights as proof of states’ obligation for a “progressive realization of the right to health” for all.

The letter concludes by asking the Trump administration to respond to four questions: 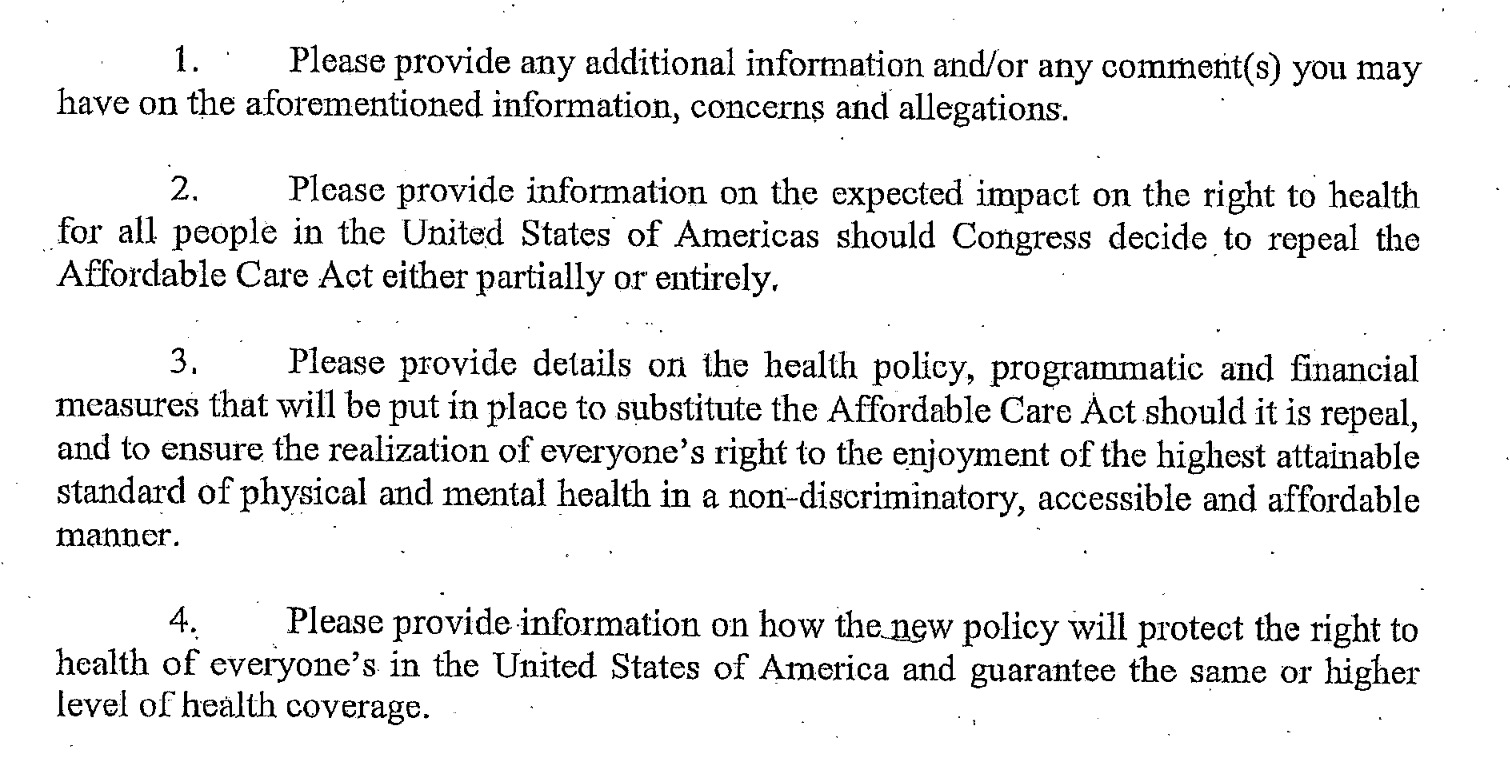 Not surprisingly, the Trump  administration has failed to respond.  According to Milbank, the letter was leaked to Congressional Democrats by a DHHS employee.

Does this mean that President Trump, or members of his administration, will be dragged before international courts?  No.  The UDHR is declaration by the UN General Assembly and doesn’t legally bind member-states, the U.S. never ratified and acceded to the ICESCR and while the U.S. has ratified the ICEAFRD, it does not recognize article 22 which provides that disputes be referred to the International Court of Justice.  President Trump can therefore probably rest easy in knowing that the long arm of the law is actually relatively short – at least in an international context.

But while public international law suffers from problems of applicability and enforceability, it still holds considerable political and moral authority in the international realm and helps provide a common aspirational foundation for UN member-states.  In the past, the U.S. has been a champion of key international legal instruments advanced by the UN and, in fact, the U.S. Department of State , still states that two of its key human rights goals are to:

•    Hold governments accountable to their obligations under universal human rights norms and international human rights instruments; and
•    Assist efforts to reform and strengthen the institutional capacity of the Office of the UN High Commissioner for Human Rights and the UN Commission on Human Rights.

Although the President may not be a fan of the UN, even he recently expressed that it has “huge potential. ”  Part of that potential is realized when the UN can compel states in meeting treaty obligations for the purposes of working towards a common goal of peace, security and prosperity.

For this reason, the U.S. should bolster the UN by addressing its concerns about possible contravention of international law.  This relatively simple approach may ensure that the U.S. can leverage the UN in securing its long-term interests in other areas.

Footnote:
This is not the first time the US has been in conflict with UN efforts to safeguard human health.  Readers of THCB will recall from my the February 7 post, “Hell Is A Very Small Place: Voices From Solitary Confinement,” the UN Special Rapporteur on Torture, Juan E. Mendez, noted in 2011 that solitary confinement, that in the US isolates prisoners for decades, be limited to no more than 15 days and be absolutely prohibited for those with mental disabilities and juveniles.