The War on Death 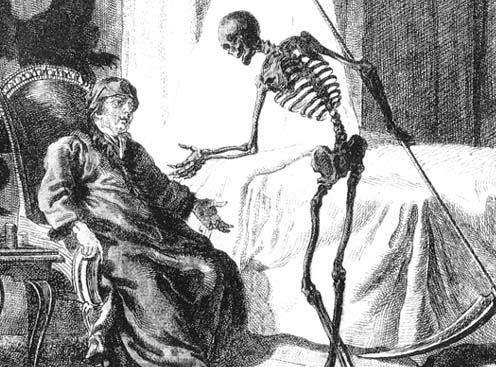 Surgeon and writer, Atul Gawande, explores the medicalization of ageing and death in Being Mortal. Gawande points to a glaring deficiency in medical education. Taught to save lives and fight death, doctors don’t bow out gracefully and say enough is enough. We’re not taught about dying. We’re taught about not dying.

In our lexicon, life is a constant war against the Grim Reaper. We say inactivity kills; screening saves lives; an intervention reduces mortality by 5 %—an arithmetic impossibility as mortality for our species, barring select prophets, remains 100%. Words have precise meanings. Words also hide precise desires. It’s not that we can’t distinguish between a murderer and colorectal cancer; but by giving cancer moral agency—we wage war on cancer—we imply that death is an anomaly that must be fought.

It would be easy to blame doctors, their incentives and egotism and offer fixes—such as fee for value, alignment of incentives, value to stakeholders, and other management speak. But Gawande doesn’t take the easy path, instead exploring death compassionately.

Gawande contrasts two cultures: the traditional east and the modern west. His grandfather, Sitaram Gawande, in a village in India lived fruitfully and died gracefully. He lived with extended family who supported him but didn’t dictate how he should live. Sitaram checked the farmland every night on horseback even at an age when, according to Gawande, he might have been in a nursing home in the United States.

I saw self-sufficiency in my grandfather as well. His family fretted about high blood pressure and his smoking. He would indulge them and then ignore them. He enjoyed their company but remained sovereign in his (bad) choices. I admired his chutzpah.

Modernism’s paradox is that strange calculus between independence and dependence. Individualism has oddly increased dependence. Dependence, that is, with the medical profession. But doctors did not cross this line willfully, even though many crossed happily. They were invited to fill a space that was occupied traditionally by religion, family, and community.

For while the rise of the nuclear family has made many people more independent, it has also left them more lonely and insecure as well—and left many people feeling guilty for ignoring their parents too. The guilt swells when a frail parent is in hospital. Physicians are caught between older patients and their children. For some relatives, medical intervention shows that they truly care, the more aggressively they push for treatment the more evidence that they care. For the doctor, intervention is the path of least resistance.

Zero paternalism hasn’t helped. The doctor no longer knows best, although other cultures are different in this. My grandfather in India fractured his femur after a stroke. My relatives paid for his care as there is no Medicare in India. The CAT scan showed a large brain infarct. Fixing his femur was deemed pointless as meaningful recovery from the stroke was unlikely. After a couple of days of unconsciousness in the ICU, his physician asked my relatives to take him home saying, emphatically, that he needed his family and not an operation.

The physician was paternalistic. He didn’t dwell on what the family might have wanted. The family accepted his judgment. They had no choice. This would be unthinkable in the US. But my grandfather died in his home surrounded by his children and grandchildren, not in a CAT scan. Paternalism sent him home.

Culture explains a lot. Indians are fatalistic. The British used to be stoic. Americans are optimistic. India taught me reality. The NHS taught me limitations. But it was the US that showed me medicine’s possibilities. Reality—Limitations—Possibilities. This is fodder for cognitive dissonance. The “can do” spirit of Americans, that admirable and infectious optimism and hope, means they throw the kitchen sink to extend life. Hope drives medical care: it is a state of mind and can’t be switched off by pressing a button.

The nursing home is a mirror for healthcare’s warts: regulations that ground innovation, concerns about safety that defy common sense, and—most depressingly—an unwillingness to individualize. Nursing homes have become mirthless, soulless places where the elderly are literally dumped.

Standardization may or may not be good for healthcare, but standardized care for older people in nursing homes is bland. It doesn’t have to be this way. Gawande describes how a maverick physician transformed the mood in a nursing home by bringing in birds and animals. Nuance, not six sigma, ails the human spirit in its twilight.

Physicians can make ageing and dying less medical. Doctors are known to die differently, tending to use less medical care. What’s good for the gander is not good for the goose. Why don’t doctors prescribe thrift to others?

But doctors, alone, can’t beat culture. Modern society obsesses about not dying. Recently, an eminent physician, Ezekiel Emanuel, in an essay wrote that he wouldn’t seek medical care after 75. It was deeply personal writing that somehow offended readers, including physicians. Some interpreted from his writing that an unproductive life is a life not worth saving.

This paranoia over nullifying the sanctity of an unproductive life reaches even the courts, as in the famous case of Terri Schiavo, who was eternally fed in a persistent vegetative state for years despite her husband’s objections. Even President Bush thought it important for her to be fed.

Where demagogues rush, doctors fear to tread. Death’s demagogues are bipartisan. Some warn that people are dying because of toxins. Others caution that in socialized healthcare there will be death panels—mythical committees that deny life saving treatments to save costs. But costs aren’t trivial. Nearly a third of healthcare spending happens in the last six months of patients’ lives—costs that may break apart US healthcare.

Dying is a vexing problem for the medical profession. The “can do” blends with the “won’t give up,” which is difficult to give up. As long as we give health an infinite value we will demonize death. In the age of plenty it is not easy to lighten up about life. But to live a little we must risk dying a little. If we die to live, we will live solely to not die. Which would be an overmedicalized life, and a dull one.

Saurabh Jha is skeptical by nature not because he hates you. He can be reached on Twitter @RogueRad. This post first appeared in the BMJ Blog