No matter what your opinion of Electronic Health Records (EHR) is, you would probably agree that the concept of computerizing medical records represents an innovation of sorts. The spread of innovation, or its diffusion, has been researched and modeled by Rogers[1] as a bell shaped advancement through populations of Innovators, Early Adopters, Early Majority, Late Majority and Laggards (the blue curve in the figure below). At some point during this spread of an innovative solution a Critical Mass of adopters, or Tipping Point, is reached and the innovation is assured widespread diffusion (Gladwell[2]).  Adoption is usually described by an S-shaped curve of adopters vs. time, and the rate of adoption is the slope of the S-shaped curve at any given time (the red curve in the figure).

The Tipping Point occurs right after the rate of adoption assumes its largest value which will be maintained throughout most of the adoption process. It is worth noting that the diffusion of innovation model is not predictive. Many innovations linger and die within the Innovator circle. Another important aspect of the model is that the time variable is not constrained. Depending on the rate of adoption, it may take weeks, months or many years for an Innovation to spread throughout a given population. There is no question that EHR adoption is slowly moving up on the ascending side of a classic diffusion model bell curve, but is it moving fast enough? Is the tipping point visible? Are we there yet? 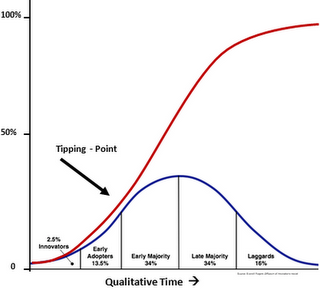