Yesterday I got a fun mass email–reprinted here at Medgadget–from Richard Saul Wurman. He founded TED, and later lost control of it to Chris Anderson who has stewarded it to being a giant among conferences. Then he founded TEDMED which ran once in the early 2000s and after Mark Hodosh approached him they restarted it together in 2009.  Now I’m not one for paying $4,000 to go to a conference but luckily RWJF did it for me and I went in 2010. It’s great fun, as you might expect, but pretty elitist and (warning: rival conference organizer envy alert ahead!) I don’t think it did much to advance the conversation on the core issues of improving health (and yes I think Health 20 does…). On the other hand it’s not TEDMED’s stated intent to do that, much as the RWJF crowd wanted into. Instead it’s about showcasing advances in medicine — which we all know is in general unrelated to health.

But yesterday it got fun. Hodosh sold the company to Jay Walker (a major & very good presenter at the last TEDMED) and Saul Wurman sent an email out blasting him & Walker and telling the price–$16m with $9m more to come! So Hodosh sold out and at that price who the hell can blame him!

But why did Walker pay that much? Eyeballing the crowd TEDMED had 500-ish attendees. Assuming even 400 paid the $4K rack rate (for $1.6m) and that sponsors kicked in another $2m, we’re only talking about a $4m revenue business. 4-6 times revenues is a nice number indeed!

And Saul Wurman is critical of Walker & Hodosh for wanting to make it even more elite like Davos–and in his email he links to a NYTimes article which says that it costs $200k  to get into Davos. Is there an appetite for that level of pricing in medical care? We’ll see!

I guess the smaller question is, will TEDMED sans Saul Wurman lose any credibility? His departure from TED didn’t exactly hurt it, although I’m sure Walker and Hodosh would rather it hadn’t happened this way.

My guess is that so long as the branding relationship with the main TED is rocksolid. TEDMED will be fine & I guess we’ll just have to wait to find out if Walker will sit on the stage next to Hodosh like Saul Wurman through every presentation–which I thought was the oddest part of the whole conference.

Just one photo from TEDMED, a really fascinating conference where I’ve been this week (courtsey of RWJ). This is Alex Drane telling Za’s story and presenting Engage with Grace. She was remarkable. 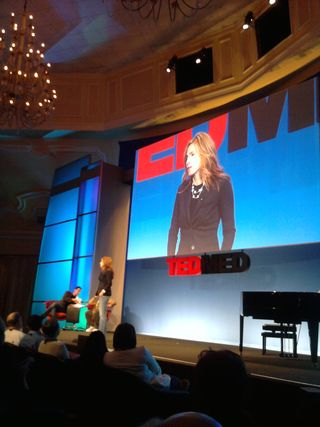