Our ancestors began using tools millions of years ago and humanity assumed control of the planet it lives on through a succession of tools ranging from sticks and stones all the way to iPhones and drones. The basic process for discovering or inventing tools hasn’t changed much over the millennia, and it follows two basic patterns. Either an existing artifact is examined for fitness to various purposes until one such purpose is discovered accidentally or through organized efforts, or a problem is identified and a tool is then invented, or located, to solve the problem.

The problem itself could be something that was thought impossible before, such as flying, or a more mundane desire to reduce the effort and expand the capabilities associated with an existing activity, such as moving goods from one place to another. Tools can have limited effects, revolutionize an entire economic sector or can change history, and some tools can have harmful effects that must be balanced with the benefits they offer for the intended task. Tools usually undergo long processes of change, improvement and expansion, and sometimes the evolving tool looks nothing like the original invention. Why are we talking about tools here? Because programmable computers are tools. The computer hardware is like the hammer head and the programming software is like the hammer’s handle (more or less). And EMRs are one such handle.

Let’s imagine that we are software builders and we have a desire to help doctors deliver patient care. And let’s further assume that we, and our prospective customers, examined all the existing tools out there and found them not quite fit for purpose. Let’s also assume that we are not suffering from delusions of grandeur, have the humility to admit that we don’t know how to cure disease and have no interest in global social engineering initiatives. Let’s imagine that we are the misguided founders of a small social business interested in doing well by helping others do good things. 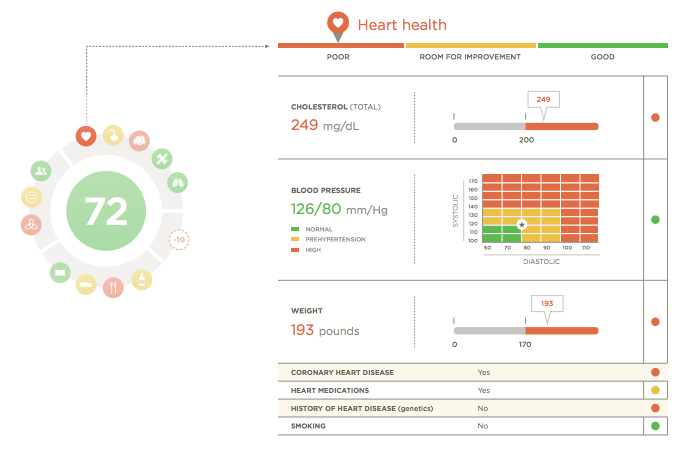 In November 2012, the digital team at HealthEd embarked on a challenge to redesign the face of personal health records. That effort has been rewarded with a first-place win in the category of Best Lab Summaries. And another HealthEd entry was cited as a finalist that “inspired the judges and challenged the status quo.”

About the Health Design Challenge

The Office of the National Coordinator of Health Information Technology and the Department of Veterans Affairs issued a challenge to designers throughout the United States: imagine how personal health records could be improved for clarity, readability, and visual appeal. Given HealthEd’s mission to create better outcomes in personal wellness, the team embraced the Health Design Challenge with typical enthusiasm.

The Health Design Challenge was more than an exercise in graphic design, however. Entrants were required to demonstrate expert knowledge of clinical systems and to render information of relevance for both millennials and senior citizens. The judges wanted more than pretty pictures—participants had to know their stuff.Continue reading…